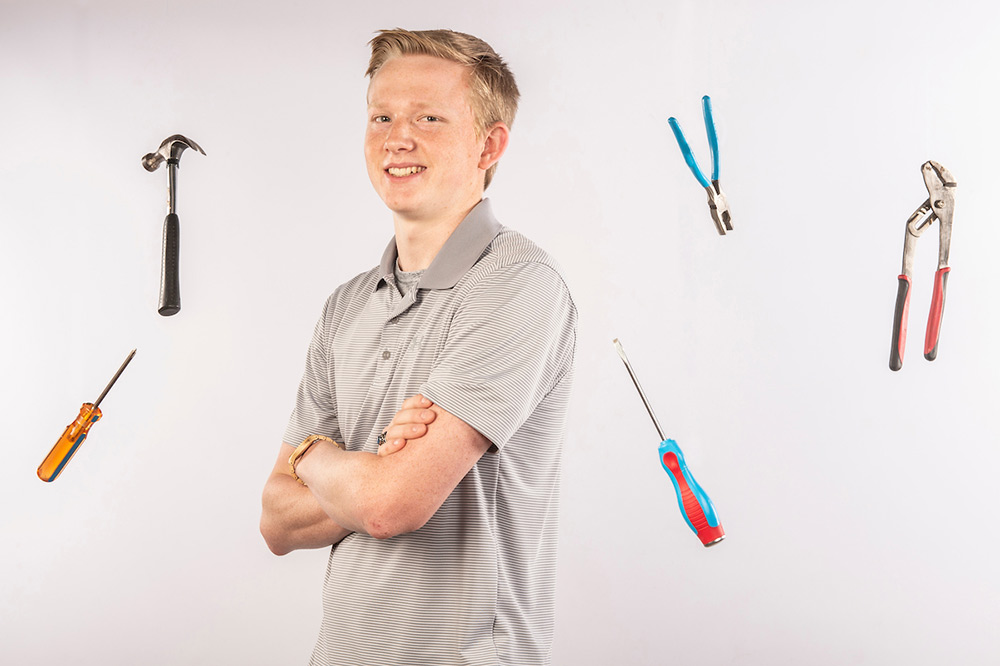 When Hunter Barlow was doing his homework on a cheap desk that kept falling apart, he decided to use his own hands to improve the situation.

Then a high school student, the Hattiesburg native designed and built his own desk that would better suit his needs. That project ended up being the first of many times Barlow would custom-build a piece of furniture.

“I had no idea what I was doing at first, so I went to Lowe’s and bought a bunch of random wood,” Barlow said. “I started watching some YouTube videos on what to do and then threw together a desk. Next thing I know, my mom asked me to make some more stuff for the house. Then my neighbors started asking me to build things.”

Now a first-year architecture student at Mississippi State, Barlow has built cabinets, planters, tables and cutting boards in addition to desks. He prefers heirloom, traditional styles in his work. He has not had to advertise his services, but has received steady opportunities as people hear about his work through word-of-mouth.

“If you’re good at your craft, your work is your advertising,” Barlow said.

Before enrolling at MSU, Barlow worked for Hattiesburg cabinet maker Patrick Bond, an experience he said taught him a lot and allowed him to refine his skills. Barlow first taught himself how to use tools left behind by his grandfather, a “Jack of all trades” who passed away when Barlow was 7 years old.

“My dad got the tools and had them in the garage,” Barlow said. “It was all old equipment, but you could do something with it. It makes me appreciate the architecture shop.”

While Barlow is not yet sure what area of architecture he wants to pursue professionally, he hopes to be able to build anything he designs. He said the architecture workshop in Giles Hall is the nicest facility he has been able to work in, with high-quality and well-maintained tools.

“With architecture, you can go a lot of different ways,” Barlow said. “You can design car bodies, houses, city plans. I really don’t know what I want to do with the degree yet, but I know it will open a lot of doors.”

When Barlow isn’t in class or working on a project, he plays the bass drum for the Famous Maroon Band. In addition to enjoying the atmosphere in the band section during MSU home football games in Davis Wade Stadium, he was able to travel to Tampa, Florida with the band for the 2019 Outback Bowl.

Among Barlow’s favorite projects is a planter box, mounted on wheels, made of Spanish cedar, the most rot-resistant wood available. He is also fond of the desk that inspired him to build objects in the first place.

“With most projects, there’s always something that goes wrong,” Barlow said. “Nothing really went wrong with the desk.”