Hanna Bewley recently completed the piece as part of a collaboration between the fine arts and biology departments.

Fine Arts Professor Soon Ee Ngoh said that this mural is a part of a collaboration between the fine arts and biology departments.

“The mural represents the various research areas or expertise of the biology faculty members who reside on the second floor of Harned Hall," Ngoh said. "This collaboration started in 2019 with the completion of the first mural by art alumna Ronni Brashear, class of 2020, on the third floor of Harned, which also highlighted the research of faculty members on that floor.”

Bewley, a Dallas native, explained that the mural is based on research done by the biology faculty on the second floor of Harned Hall.

“The focus on the central wall begins with the Fibonacci spiral; I felt this was fitting because so many aspects of biology revolve around this pattern,” Bewley said. “A few aspects of the mural based upon areas of study include DNA, cells, water lilies, the heart, tomatoes, plants, chromosomes and the nematodes to name a few... Other notable images I included were the magnolia to represent Mississippi, the koi fish to give depth to the water lilies and remind me of my childhood, the pansy flower, bumble bee and green lizard in honor of my grandparents that also serve to highlight common organisms found in Mississippi.”

Bewley said there was a long process before she could start painting including planning, conversing with faculty and getting approval from the art and biology departments for her design. 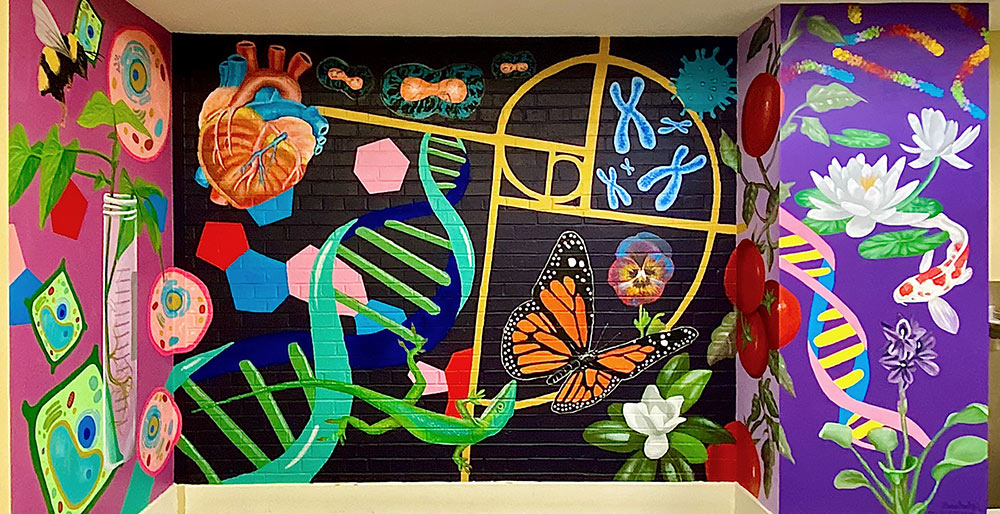 “Once I began painting,” Bewley said, “I started filling in the different background colors. After the background was completed, I worked on various aspects of each wall so I could see each area evolve at the same time. I incorporated similar colors on each wall to create unity. Adding the finishing touches was so much fun as I could finally see the final product of countless hours of work.”

Bewley said she is proud of how the mural comes together as one despite being displayed among four different walls. She also said she enjoys the bright and lively colors and designs in this mural and how it grew as she worked on it.

Professor Ngoh said the art students have created murals in the past and have plans to continue doing so in the future.

“In the past, art students have created murals under the mentorship and guidance of Art Professor Emeritus Brent Funderburk for other units on campus, including the Longest Student Health Center, Colvard Student Union and the Department of Geosciences Dunn-Seiler Geology Museum. Murals were not a common practice then, but it appears there are now more opportunities for art students to create murals for other departments and for the Starkville community. Currently, there is a collective of students working on the Jackson Street mural in collaboration with the Starkville Area Arts Council.”

Bewley graduated this past spring semester and is thankful for the opportunity to display her work at Mississippi State.

“I signed my name on the mural graduation weekend and had such a sense of accomplishment,” Bewley said, “I am so thankful to be able to leave a lasting mark on Mississippi State that will hopefully inspire generations to come.”